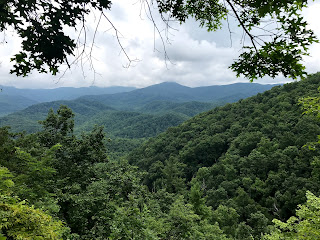 “There is a phenomenon called Trail Magic, known and spoken of with reverence by everyone who hikes the trail, which holds that often when things look darkest some little piece of serendipity comes along to put you back on a heavenly plane.”
― Bill Bryson, A Walk in the Woods: Rediscovering America on the Appalachian Trail

Dreams. Some you don’t speak out loud….you just hold them in your heart.
I remember in high school and college reading about the Appalachian Trail and wondering what it would be like to hike there. I grew up living in the country and loving the outdoors but moved to the city once I got married.
A  few years ago, I came across a book titled Becoming Odessa. It moved me to my core. After I read that, I picked up Bill Bryson’s book which was a different, but equally moving tale, of the trail.
At that time I promised myself that before I died I would hike the AT (Appalachian Trail) …maybe not the whole thing but at least some part of it.
But then I put that dream aside thinking it could never happen. I am a mom of 5 who is not a hiker by nature.  I never told a soul about that dream. I just held it in my heart.
Fast forward a few years, years filled with more heartache than I care to mention. My kids and I decided to take a road trip….the first vacation I have taken with my kids in over 10 years. I let them choose where they wanted to go. We just got in the car and started driving. While driving south they told me they wanted to go to the Smoky Mountains. I had never been and agreed in a heartbeat. We booked a hotel while driving to Gatlinburg(aren’t cell phones amazing?!).
I didn’t know how close the AT was at that point I just knew that we were going to be hiking in the mountains. We got up early and went to the Visitor Center of the National Park. If you have never been, these facilities are an amazing wealth of information! We picked up a trail map and once again I let the kids make the choices. Turns out the trail they chose, the one the Ranger said would have spectacular views of the mountains and was not an easy hike, was a trail that was 8 miles out and back of the AT, but did not know that yet……

We drove up the twisting and turning mountain road to Newfound Gap stopping along the way to take photos of the breathtaking beauty of the Smokies. We parked at the overlook and found the trailhead. I looked at the sign and gasped. The AT!   We took more photos and then headed out onto the trail.  I really could not believe that I was standing on part of the AT. Most visitors head out only 1/4 a mile or so and then back to the cars as this is listed as a “Challenging” hike.  Not us!  We were in it for the whole distance. 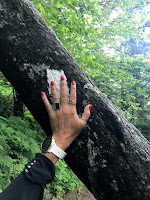 It was not until we were deeper into the trail that I saw it……the white rectangle. The distinct marker of the Appalachian Trail. These markers are found over 2,000 miles of trail to keep hikers on the right path. I had read about them in books and seen photos but now here I was…..facing one……and I started to cry. Yup….I cried. My kids were ahead of me and there I was crying in the woods! I took a few minutes to take it all in and continued on the trail, finding my kids up ahead sitting on a rock taking a water break. They asked what was wrong and I told them the about my dream to hike the AT and that I had never told anyone. We sat in silence for a few minutes….and then as kids do….. one said …. “Ok …well then …let’s keep going…” God Forbid mom get sappy!
For several hours we hiked and chatted and were silent and took lots of photos. I taught them about things we encountered such as salamanders and lichen and they reminded me to be careful….”You are no spring chicken, mom”
There were times that we sort of spread out, each going at our own pace, so I was alone for a while. (Funny, when I looked at the photos, I realized I was wearing my “Forward is a pace” Shirt).
It was one of the most magical experiences of my life. I was able to breathe like never before. I could feel my heartbeat. I could fill my lungs with fresh air. I could smell the mountains. I could see for miles. I could touch the cool moss on the trees. I could feel the earth beneath my feet like never before. I felt a connection to the Earth like never before. Trail Magic. It was Trail Magic.
My kids had helped me live a dream I had never before had the courage to speak out loud. The memories of this day I will hold in my heart forever.  The feeling of achieving even a part of my dream is something I will thank my children for forever.
Peace –
#forwardisapace
#tutulady