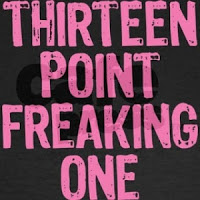 There are many bumper stickers and shirts that have clever sayings about half marathons.

13.1 cuz I’m only half crazy, 13.1 is half of nothing, etc. but today it took all I had to get through 13.1 miles.
An early alarm clock shoved me out of bed and towards the bathroom to get dressed and ready. Perhaps running 6.5 miles,  spending the afternoon at a block party, drinking, going out to dinner, and staying up past my bedtime was not the perfect race prep. I ate some yogurt and drank a little coffee (another mistake). It was already a warm morning and the air was playing possum….not moving at all. The girls arrived and we put on our 13.1 tattoos on our legs  then loaded up the TMI truck and headed downtown.
The drive down was a very mellow one for the TMI truck. We were all a little tired and nervous. We parked and geared up in the garage. Once everyone was ready, we headed to the start. The air was thick, warm and still. not a perfect running morning but hey, I was with the girls and  all that really mattered was starting and finishing. Oh if I had only known….
We got in our corral and met a friend. We only had to wait a few minutes before they sang the Star Spangled Banner and the gun went off. The only goal for today was forward. Forward was to be my pace of the day.

The first 3 miles were adrenaline fueled and quicker than they should have been for me. I was trying to beat the sun and …well… at my pace I should have known that was a race I would lose. By mile 4 I was so hot and sweating bullets. I slowed my pace as I realized this was not going to be a PR day. Mile 5 I took in an AccelGel and that seemed to help my mood. At about mile 6 I heard a woman in from of me telling her running buddy that she didn’t feel good, she rocked back and forth and then fell down…right in front of me. They did not have their own water so I left them with one of my bottles and went to find a course marshal. the 2 of us ran back and she said she was already feeling better so I grabbed my bottle and pressed on…knowing she was in good hands.

At this point the sun had disappeared between the clouds and a slight Lake breeze had picked up. It was just enough to get me going again…but I knew that any idea I had of even coming close to a decent time was now completely gone…I moved forward. I was doing ok and feeling good until the sun came back out again and this time She was not playing around. Her mission was to get me so hot that I quit….I was not interested. I adjusted my pace again and moved forward but slowly. Since I knew this battle with Sun was going to take a awhile, I stopped and took pictures of the wonderful Lake/City views. i am blessed to live in such a fantastic city with picture perfect skylines all along the path. I just took it all in and enjoyed the view. 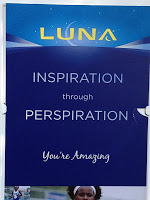 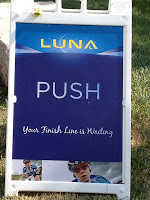 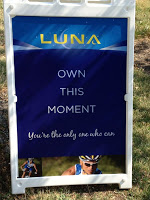 Coming towards McCormick place was one of the final water stops (mile 10/11 I think). I downed my water/sport drink mix and pressed forward. This was the same water stop I had seen some great signs provided by Luna. they made me smile on the way out and were more encouraging on the way back. So, i slowed to take pictures of them. These are phrases I will keep in my head for my next tough run.  I think i missed one but you get the idea. Thank you Luna! 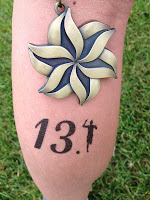 The end was near and I could sense that Sun was getting angry. She was fighting a losing battle with this determined runner and she was not happy. The journey around the front of the Shedd was beautiful and I soaked it in….I knew I was getting close.  Under the tunnel and up a final hill (yup…there were plenty of hills in this race). I turned the corner and could see the finish line….and I took off. I was going to finish strong if it killed me! (and it nearly did!). As I finished, I heard a man tell, “Nice skirt, Tinkerbell” I looked right at him and said….”It’s a tutu and I am the QUEEN!”….and with that I crossed the finish line. I was greeted with ice cold towels and cooling fans. I got a bag of ice and then a wonderful volunteer (with a 50K race shirt) draped a medal around my neck. I was done. I had finished. It was my worst time ever but I finished. Both the sun and this race tried to get the best of me and I was not having it…not today! The sun had disappeared again…probably sulking….

I found my girls and we got snacks and yoga mats. We waited for everyone eating ice like popcorn. Once we had caught our breath and took a few photos, we headed towards the truck. As we left I saw the race director and thanked him for a great race. it was well run and the course marshals really took care of the runners well. These people had multiple obstacles to overcome today…the biggest was the weather…and they did a great job. I wanted him to know that they did well…everyone did well.

We loaded up the truck and headed for booze and burgers. A Bloody Mary after a race like today to manna from heaven as were the salty fries and burger. More chatting, storytelling and FB posting took place as we ate and soon it was time to part ways.  We all were going home to rest and relax. We all….every last runner….earned that medal today. The Inaugural Women’s Half as was half of nothing today…it was full of so much. Peace.