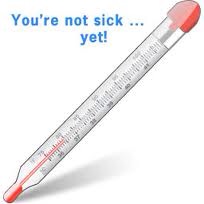 Do you have Running fever?
Running Fever is described generally as an irrational urge to run any distance from a block to miles and miles. Onset may be sudden, or may occur after a long and gradual incubation period. Couch to 5K can most likely lead to running fever. Symptoms may include signs of insanity, a sudden increase in levels of technical fabric the wardrobe; a change in sleeping patterns (such as waking up before the sun to run); hoarding of energy gels; and over spending on such items as shoes, shirts, hats and GPS watches.
Running Fever is transmitted in any number of ways. Most commonly, newbies pick it up from a friend or relative. It can be transmitted through the air, as a runner talks about her adventures. It can also be transmitted virally, like when a runner views one of those motivational images on Facebook. In rare cases, a runner can catch running Fever simply by touching a runner’s finisher’s medal.

There is no known treatment for Running Fever. It might go into remission for a time but it rears its head time and time again. Once you have it, you are stuck with it! Sufferers can minimize symptoms by entering, training for, and finishing a race of any distance. This may result in blisters, stiffness, body aches, and confusion — all signs that the body is ridding itself of the toxic poisons of couch potato sickness.
Running fever is a disease of the mind and body but, in the long run, benefits both. Peace.