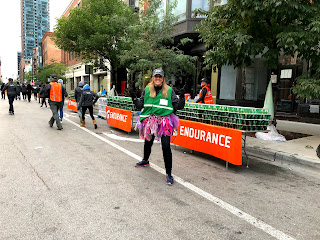 Today was one for the books. I registered to run the Chicago Marathon this year. I started training and was excited to run again. Much to my disappointment, my hip was not as excited as I was and got really angry!  We tried therapy (PT) and that calmed things down for a bit but Old Righty was not giving up. Thus, I make a choice to defer my entry and try to heal what was damaged.
As race day grew closer, I was having a BAD case of FOMO, so I decided to volunteer for Blessons and work at an aide station.  One thing that many people do not know is that the Chicago Marathon gives back….until it hurts like a runners quads after 26.2! Charities that volunteer or have people volunteer receive a donation from the Chicago Marathon which is often sizable.
Blessons put out the call for volunteers and I jumped at the chance. #tutulady switched it up and instead of running the Marathon, she was volunteering at the Marathon…..tutu and all!
I was not told my role until shortly before the Marathon. I was to be the Left Side Gatorade Supervisor. I did not know what that meant but I was about to find out.
I got up at 2:45am and was out the door by 3:45am. Grabbed a coffee and hit the Kennedy. Who would have thought that there would be traffic at that hour but there was! I arrived and my parking garage, parked and walked to the Aide Station check in…passing a man relieving himself in the alley and a group of others who appeared to just be going home from a long night clubbing!
Volunteers take skids of materials and create an aide station for runners. Tables, cups, and Gatorade….. Gatorade that needs to my mixed with water to make the correct formula for runners. The first few hours are getting the volunteers organized, mixing that gatorade, pouring and stacking layers of filled cups. Today was a struggle as the cups kept blowing off the table. Also, my group of volunteers were high school kids. If you know me, you know that I work well with teens and am not a pushover….I push back.  Those kids worked hard today…whether they liked it or not!
Once we get set up, we wait. First come the wheelchair athletes. Inspirational? One of the first  of theses kind of moments today. After the wheelchairs, come the elites. I have never seen them running up close. I have either watched on tv or they are finished by the time I start!! The woman that set world record today was running so fast, I barely had time to take her picture. Elite men and women have their own water/gatorade so the real work begins once they are through.
Here come the masses!  Thousands and thousands of runners There is a technique to holding the cup for the ease of runners as well as where to stand, refilling tables with cups once they are empty, and raking/bagging the trash runners leave behind. It is a lot but my volunteers did all that and cheered the runners!  It was amazing to watch!
Today I got to see so many runners that were living their dream. Some that stood out? 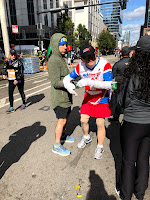 And finally Mike. Mike showed up as the last runner. The sag wagon had gone by. Runners were really supposed to be on the sidewalk but Mike was on the street. The garbage trucks had gone by and we were on the last of packing up. All leftover items were shrinkwrapped on skids ready for pick up. Mike just asked for water. I had none (I was Gatorade) So I ran up 2 blocks and grabbed him a gallon of water. Sorry, no cups I told him. Just drink from the gallon and he could keep it or I would get rid of it. He took a few long pulls while we stood in the middle of the street. While he was drinking I told him I was impressed and that he was going to finish today!  He stopped drinking and looked at me. Then said, “you are damn right I am going to finish! I am 70 years old and I have 2 new knees. I did not come this far to quit!” So I started to walk with him and he put his arm around my shoulders. He said, “Listen…life is too short to quit when it gets hard. You need to always keep moving forward.” 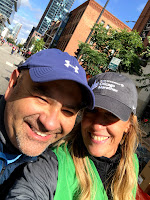 I started to cry as we approached a group of volunteers finishing cleaning and I yelled “This is Mike. He is 70 and had 2 new knees…..can we give him some love?” The teens made a tunnel for him while cheering. He turned, kissed me on the cheek and said “The world needs more people like you….”

“Just finish strong, Mike” and he was gone….walking away.
I did not take a photo but his face is seared in my memory. I was in the moment and the last thing I thought of is that I did not get a photo. I do not know his number nor do I know if he finished. What I do know is that he was the last guy I saw on the course and he touched my heart deeply and profoundly. I will never forget him.
I drove home mentally and physically exhausted…like I had run my own marathon.
Each year I write about my marathon experience and how it changes me. Today changed me in more ways than I ever thought possible. If you have never volunteered at a race, DO IT!  You will help a charity and the runners more than you realize. You will change too…whether you like it or not!
To those friends I missed, I am sorry!  I wanted to find everyone but its hard when you are trying to make sure you all have gatorade! To all those that started and moved forward for 26.2 miles, you ROCK! I am sooo proud of you! You are a MARATHONER!! Wear that medal all week as you go backwards down every staircase! 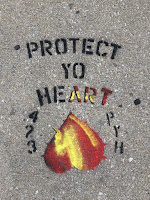 Gallons of sticky yellow gatorade, over 30,000 steps, countless highfives, hundreds of hugs, numerous inspirational moments and heart so full it could burst. Today was one for the books for #tutulady.
Peace
#forwardisapace
#tutulady 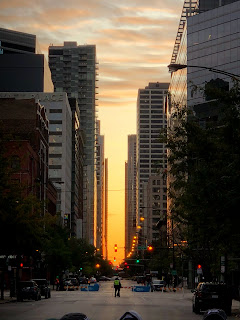